When Affirmative Action was White 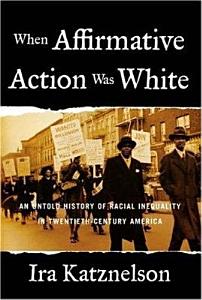 In this "penetrating new analysis" (New York Times Book Review) Ira Katznelson fundamentally recasts our understanding of twentieth-century American history and demonstrates that all the key programs passed during the New Deal and Fair Deal era of the 1930s and 1940s were created in a deeply discriminatory manner. Through mechanisms designed by Southern Democrats that specifically excluded maids and farm workers, the gap between blacks and whites actually widened despite postwar prosperity. In the words of noted historian Eric Foner, "Katznelson's incisive book should change the terms of debate about affirmative action, and about the last seventy years of American history." 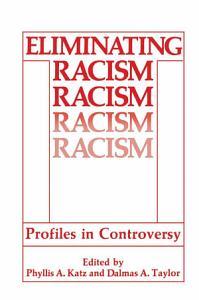 The chapters presented here provide the reader with an awareness of the divergent views of what constitutes racism and frameworks for reducing it. This book points out that the dialogue and research on this subject since the mid-1970s have yielded increased contro versy over the theories, foundation, and continued existence of racism. Ironically, what we viewed in the 1954Brown decision and the Civil Rights Act of 1964as the beginning of the end of racism turned out to be the beginning of confusion over the course of action to ensure societal acceptance of political mandates. Hence, the title of this book captures the essence of the emotional core of any forum for examining racism, past and present. One of the most controversial forums has been that ofeducation, beginning with the D.S. Supreme Court's 1954ruling in Brown v. Board oi Education. Behind every event that has spawned controversy is a profile in courage. It was not a simple decision for the players in the scenario of the Brown v. Board oi Education case to step forward and present themselves as evidence of discrimination. Blackparents supported by black organizations viewed this legal action as a chance for equal opportunity. Yet, the 1950s were a time when black communities were pained by the thought that bigotry and institutional racism would forever stand in the way of their achieving equality. 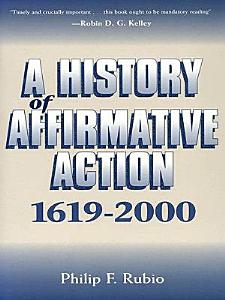 A readable history that puts the current debates in historical context

The Hidden Cost of Being African American 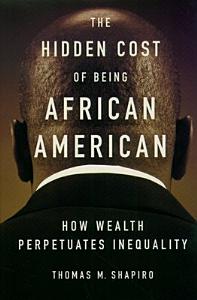 Affirmative action: does it really counteract racism? Is it morally justifiable? In her timely and tough-minded book, Gertrude Ezorsky addresses these central issues in the ongoing controversy surrounding affirmative action, and comes up with some convincing answers. Ezorsky begins by examining the effectiveness of affirmative action as a remedy for institutional racism in the workplace. She analyzes the ways in which common practices-selection of employees based on personal connections, qualification, and seniority standards-perpetuate the injurious effect of past racial discrimination, and she assesses the rationale for such affirmative action measures as objective job-related testing, numerical goals, and preferential treatment for basically qualified blacks. To illuminate the social reality in which affirmative action takes place, she draws on recent work by social scientists and legal scholars. Turning to the moral issues, Ezorsky posits two basic justifications for affirmative action: first, looking backward-to provide deserved compensation for past racial injustice that was sanctioned, practiced, and encouraged by our government; second, looking forward-to promote racial desegregation in the American workplace. Unlike some supporters of affirmative action, she does not deny that preferential treatment may place an unfair burden on white males. Indeed, she suggests specific practical measures for spreading that burden more equitably. Clear-headed, well-reasoned, and persuasive, this book will be read eagerly by everyone from students to legislators, by anyone concerned with racial justice in America. --Cornel West 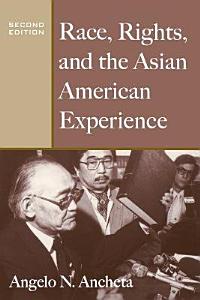 Demonstrates how United States civil rights laws have been framed by a black-white model of race that typically ignores the experiences of other groups, including Asian Americans. When racial discourse is limited to antagonisms between black and white, Asian Americans often find themselves in a racial limbo, marginalized or unrecognized as full participants. Ancheta examines legal and social theories of racial discrimination, ethnic differences in the Asian American population, nativism, citizenship, language, school desegregation and affirmative action. In this second edition, Ancheta also covers post-9/11 anti-Asian sentiment and racial profiling. --From publisher description.

The Next Twenty five Years 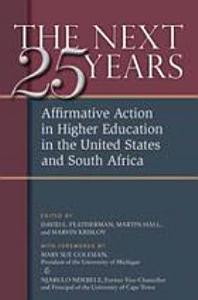 A penetrating exploration of affirmative action's continued place in 21st-century higher education, The Next Twenty-five Years assembles the viewpoints of some of the most influential scholars, educators, university leaders, and public officials. Its comparative essays range the political spectrum and debates in two nations to survey the legal, political, social, economic, and moral dimensions of affirmative action and its role in helping higher education contribute to a just, equitable, and vital society. David L. Featherman is Professor of Sociology and Psychology and Founding Director of the Center for Advancing Research and Solutions for Society at the University of Michigan. Martin Hall is Vice-Chancellor of the University of Salford, Greater Manchester, and previously was Deputy Vice- Chancellor at the University of Cape Town. Marvin Krislov is President of Oberlin College and previously was Vice President and General Counsel at the University of Michigan.

To Fulfill These Rights 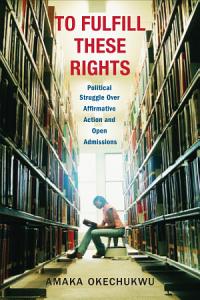 In 2014 and 2015, students at dozens of colleges and universities held protests demanding increased representation of Black and Latino students and calling for a campus climate that was less hostile to students of color. Their activism recalled an earlier era: in the 1960s and 1970s, widespread campus protest by Black and Latino students contributed to the development of affirmative action and open admissions policies. Yet in the decades since, affirmative action has become a magnet for conservative backlash and in many cases has been completely dismantled. In To Fulfill These Rights, Amaka Okechukwu offers a historically informed sociological account of the struggles over affirmative action and open admissions in higher education. Through case studies of policy retrenchment at public universities, she documents the protracted—but not always successful—rollback of inclusive policies in the context of shifting race and class politics. Okechukwu explores how conservative political actors, liberal administrators and legislators, and radical students have defined, challenged, and transformed the racial logics of colorblindness and diversity through political struggle. She highlights the voices and actions of the students fighting policy shifts in on-the-ground accounts of mobilization and activism, alongside incisive scrutiny of conservative tactics and messaging. To Fulfill These Rights provides a new analysis of the politics of higher education, centering the changing understandings and practices of race and class in the United States. It is timely and important reading at a moment when a right-wing Department of Justice and Supreme Court threaten the end of affirmative action. 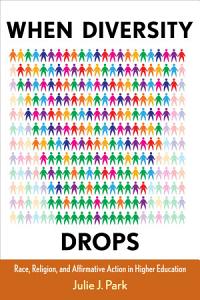 Julie J. Park examines how losing racial diversity in a university affects the everyday lives of its students. She uses a student organization, the InterVarsity Christian Fellowship (IVCF) at “California University,” as a case study to show how reductions in racial diversity impact the ability of students to sustain multiethnic communities. The story documents IVCF’s evolution from a predominantly white group that rarely addressed race to the most racially diverse campus fellowship at the university. However, its ability to maintain its multiethnic membership was severely hampered by the drop in black enrollment at California University following the passage of Proposition 209, a statewide affirmative action ban. Park demonstrates how the friendships that students have—or do not have—across racial lines are not just a matter of personal preference or choice; they take place in the contexts that are inevitably shaped by the demographic conditions of the university. She contends that a strong organizational commitment to diversity, while essential, cannot sustain racially diverse student subcultures. Her work makes a critical contribution to our understanding of race and inequality in collegiate life and is a valuable resource for educators and researchers interested in the influence of racial politics on students’ lives.

The Imperative of Integration 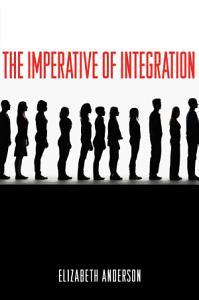 More than forty years have passed since Congress, in response to the Civil Rights Movement, enacted sweeping antidiscrimination laws in the Civil Rights Act of 1964, the Voting Rights Act of 1965, and the Fair Housing Act of 1968. As a signal achievement of that legacy, in 2008, Americans elected their first African American president. Some would argue that we have finally arrived at a postracial America, but The Imperative of Integration indicates otherwise. Elizabeth Anderson demonstrates that, despite progress toward racial equality, African Americans remain disadvantaged on virtually all measures of well-being. Segregation remains a key cause of these problems, and Anderson skillfully shows why racial integration is needed to address these issues. Weaving together extensive social science findings--in economics, sociology, and psychology--with political theory, this book provides a compelling argument for reviving the ideal of racial integration to overcome injustice and inequality, and to build a better democracy. Considering the effects of segregation and integration across multiple social arenas, Anderson exposes the deficiencies of racial views on both the right and the left. She reveals the limitations of conservative explanations for black disadvantage in terms of cultural pathology within the black community and explains why color blindness is morally misguided. Multicultural celebrations of group differences are also not enough to solve our racial problems. Anderson provides a distinctive rationale for affirmative action as a tool for promoting integration, and explores how integration can be practiced beyond affirmative action. Offering an expansive model for practicing political philosophy in close collaboration with the social sciences, this book is a trenchant examination of how racial integration can lead to a more robust and responsive democracy.